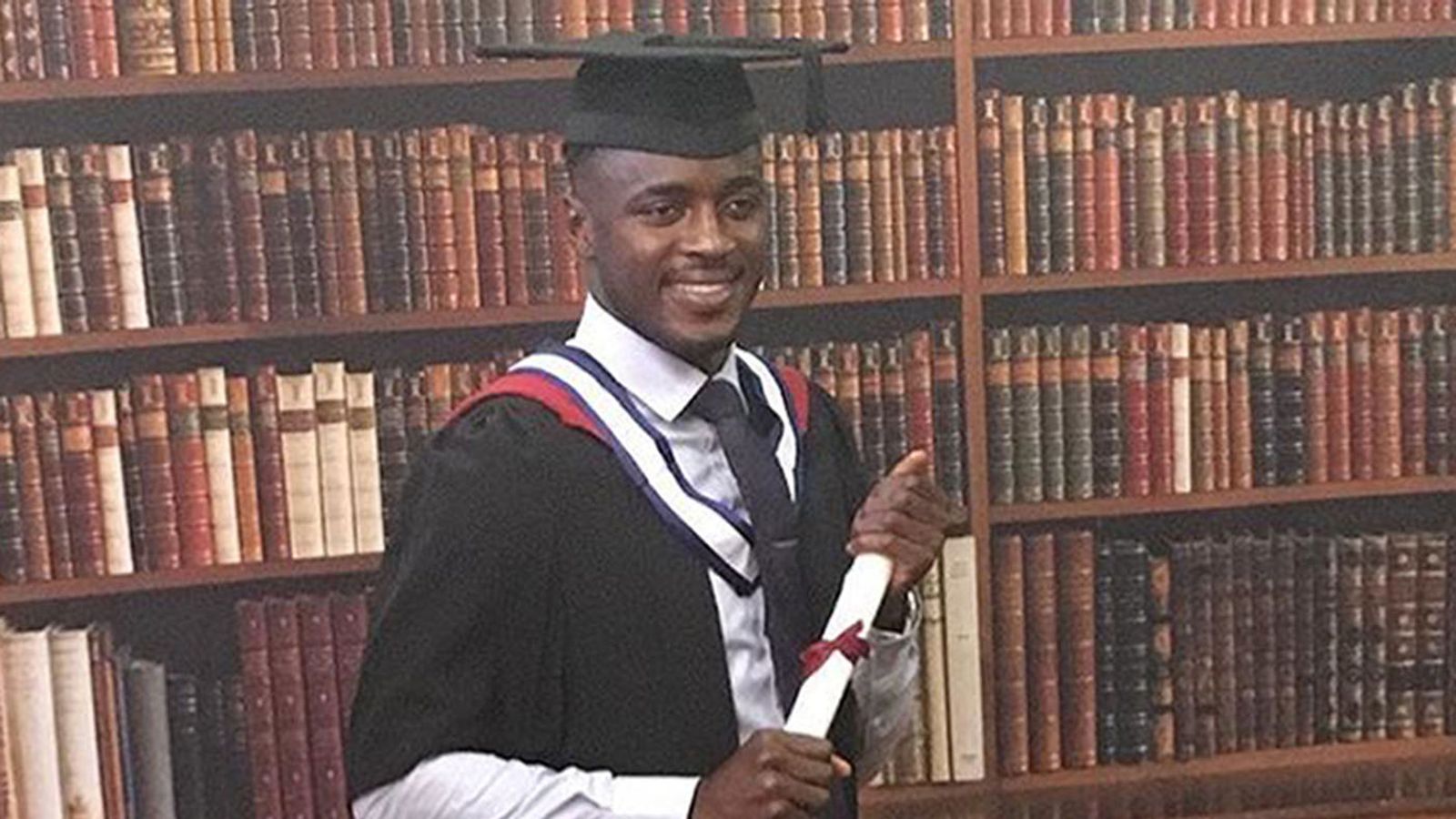 The family of a personal trainer who was shot dead years after he helped convict a gang of rapists fear his killer will never be caught.

Abraham Badru, 26, was murdered outside his home in Hackney, east London, in March 2018 after he had received threatening messages telling him he was “dead meat”.

He was just 14 when he rescued a woman from a gang rape and gave evidence in court against the suspects, receiving a bravery award for his actions, but lived in fear of retribution.

A spokesman for Mr Badru’s family said they believe police are no longer actively investigating his killing after detectives were met by a “wall of silence” in the case.

However the Metropolitan Police insist the investigation remains open and it will review any new information that emerges about the murder.

Mr Badru’s friend Sheun David Onamusi told Sky News the victim’s family believe there is a “potential major suspect” in his killing and there is “concern” that no one will be brought to justice.

“It’s four years… and we haven’t had any progress in terms of bringing someone to the books.

“We would like to see some level of justice… and get some answers, some really clear answers as to why that happened.

“This was a gun crime – it was at close range, so the person had enough time to get close to him to shoot him.”

Mr Onamusi hopes an upcoming inquest into Mr Badru’s death will provide “clarity” on the level of protection that was offered after he gave evidence at the rape trial.

He said he was “proud” of his friend for coming to the rescue of the rape victim in 2007 and for giving evidence against the suspects in court.

“He was an upstanding young man,” Mr Onamusi added.

“I was proud he stepped in and said ‘this is wrong, this shouldn’t be happening’ and he wanted to protect the lady from what happened.”

Mr Onamusi, who was a mentor to Mr Badru at church, spoke to Sky News on behalf of the victim’s mother, Ronke, who was recently discharged from hospital following ill health.

At a previous inquest hearing in February, Mrs Badru said she begged police not to make her son testify against the rape suspects, but was told she would be charged with perverting the course of justice if she intervened.

She said her son received threatening messages days after the rape suspects were arrested including one saying: “You’re dead meat”.

“He was so scared, he stopped going out,” she added.

Mr Badru was on the phone to a woman when he was fatally shot as he unloaded items from the boot of his car, shortly after 11pm on 25 March 2018, the inquest hearing was told.

A £20,000 reward was offered for information to help catch his killer but Detective Sergeant Matthew Bennett told the hearing there had been “a wall of silence in relation to the murder investigation”.

He said the gang rape suspects all had alibis for the night Mr Badru was killed, while other lines of investigation – including investigating the women he was speaking to in the months before he died – drew a blank.

The full inquest into Mr Badru’s death was due to be held on Friday but a spokeswoman for Poplar Coroners Court said the hearing had been postponed to a date to be confirmed.

Detective Chief Inspector Geoff Grogan, from the Met Police, told Sky News: “My thoughts remain with Abraham’s family and we remain completely committed to bringing the person responsible for his murder to justice.

“The investigation remains open and we continue to review the evidence gathered so far, as well as any new information that emerges about Abraham’s murder.

“I would encourage anyone who can help the investigation to come forward.”

California plans to send millions of ‘inflation relief’ payments of up to $1,050. Here’s what we know about whether other states will follow
Wealthy customers will help Apple resist the effects of inflation
Bitcoin Family say they lost $1 million on their investment this year, but sold a lot at peak
Bette Midler sparks backlash over ‘anti-trans’ tweet – as JK Rowling backs Macy Gray’s ‘bigoted’ comments
Bobby Bonilla Day explained: Why the Mets still pay him $1.19M every July 1