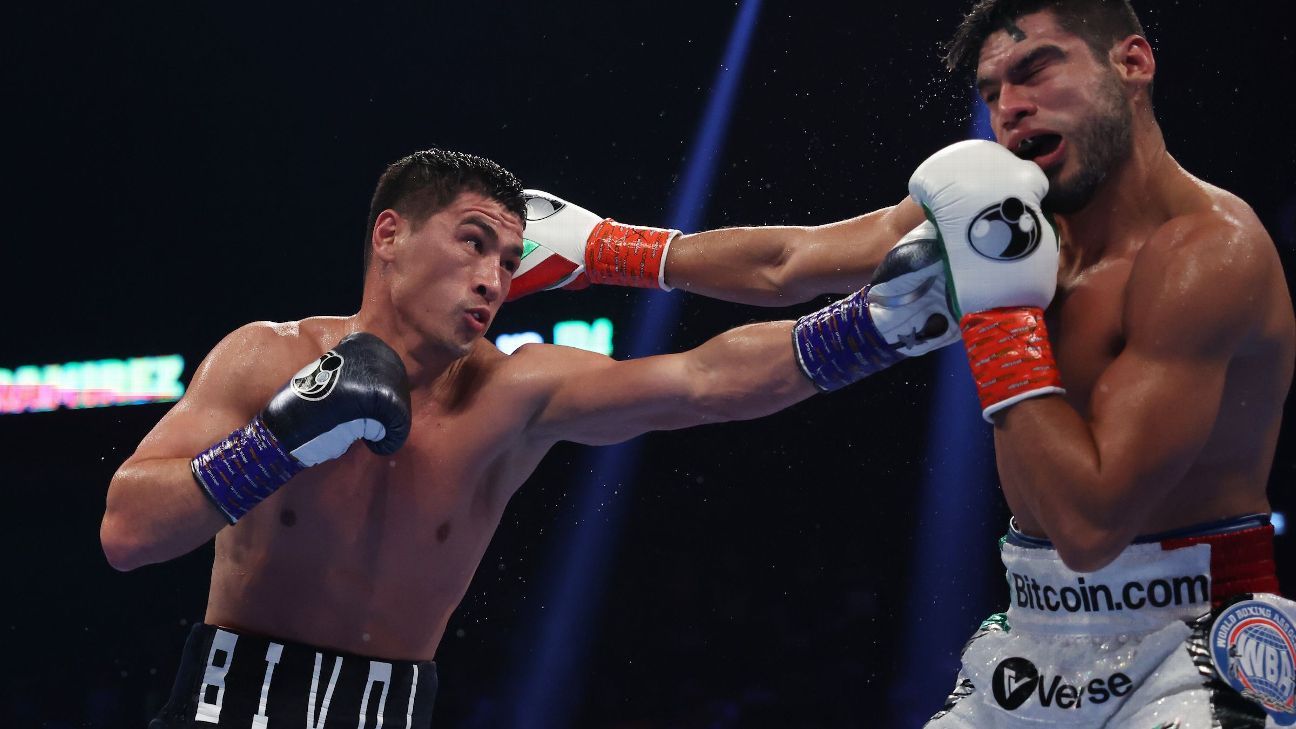 With the pair of impressive wins, Bivol (21-0, 11 KOs) is the clear front-runner for Fighter of the Year honors with less than 60 days remaining in the 2022 campaign.

“I proved myself, I can be the best guy in the world,” said Bivol, ESPN’s No. 8 pound-for-pound boxer. “… The lion is not biggest animal in jungle, but he’s king. Zurdo bigger than me; doesn’t matter.”

Indeed, Ramirez appeared to be the far bigger man, even though he’s a former 168-pound titleholder who moved up to 175 in 2019. The 31-year-old Mexican fighter had stopped all five of his light heavyweight opponents inside the distance but was never truly in the fight with Bivol.

The 31-year-old Bivol, who fights out of St. Petersburg, Russia, controlled the action from the opening bell with his excellent jab, smooth footwork and impeccable timing.

In previous fights, Bivol was content to box from the outside, but against Alvarez, he was far more aggressive and unleashed five- and six-punch combinations. And once again, Bivol came forward. He wisely applied pressure and peppered Ramirez with jabs and straight right hands that met the mark over and over.

Curiously, Ramirez attempted to outbox Bivol, rather than fire body shots and pressure the champion. The strategy simply made matters easier for Bivol, who used superior hand speed and footwork to evade Ramirez’s power shots and make him pay.

Now, Bivol hopes to fight Artur Beterbiev, who holds three light heavyweight titles, in one of the best matchups the sport can offer. Beterbiev, ESPN’s No. 7 pound-for-pound boxer, is set to fight Anthony Yarde on Jan. 28. But if he’s victorious, a meeting with Bivol would crown an undisputed 175-pound champion.

“I have a goal; I wanna be undisputed champion, but it doesn’t all depend on me,” Bivol said. “If it all depends on me, I fight for all four belts. … I hope they are listening to me, what I want. I’m like a kid who has a dream; I want to go with this dream.”

If Bivol can’t land Beterbiev in due course, a rematch with Alvarez, who recently underwent surgery on his left wrist, is a possibility. When Bivol routed Alvarez in May, the bout was contested at 175 pounds for Bivol’s light heavyweight title. Would Bivol consider fighting Alvarez at 168 pounds, where he remains undisputed super middleweight champion, to chase his dream?

“For four belts, it’s interesting fight. Why not?” Bivol said. “But remember, I’m light heavyweight. This is my weight.”

And right now, Bivol just might be peerless at his weight. After all, Ramirez entered the fight rated No. 3 at 175 pounds by ESPN and wasn’t remotely competitive, even though he appeared to believe otherwise.

Only Beterbiev, it seems, has any chance to upend Bivol’s title reign, which is now at five years and 10 defenses (and counting).

On the Matchroom Boxing on DAZN undercard, Shavkat Rakhimov scored two knockdowns of Zelfa Barrett in Round 9 for the stoppage victory to capture the vacant IBF junior lightweight title. Rakhimov, who was floored in Round 3, will next fight Joe Cordina, who was stripped of the title following hand surgery.

In another undercard title fight, Chantelle Cameron scored a unanimous-decision victory over Jessica McCaskill — scores of 97-93, 96-94 and 96-94 — to claim the undisputed women’s junior welterweight championship. McCaskill entered the bout rated No. 4 pound-for-pound by ESPN.