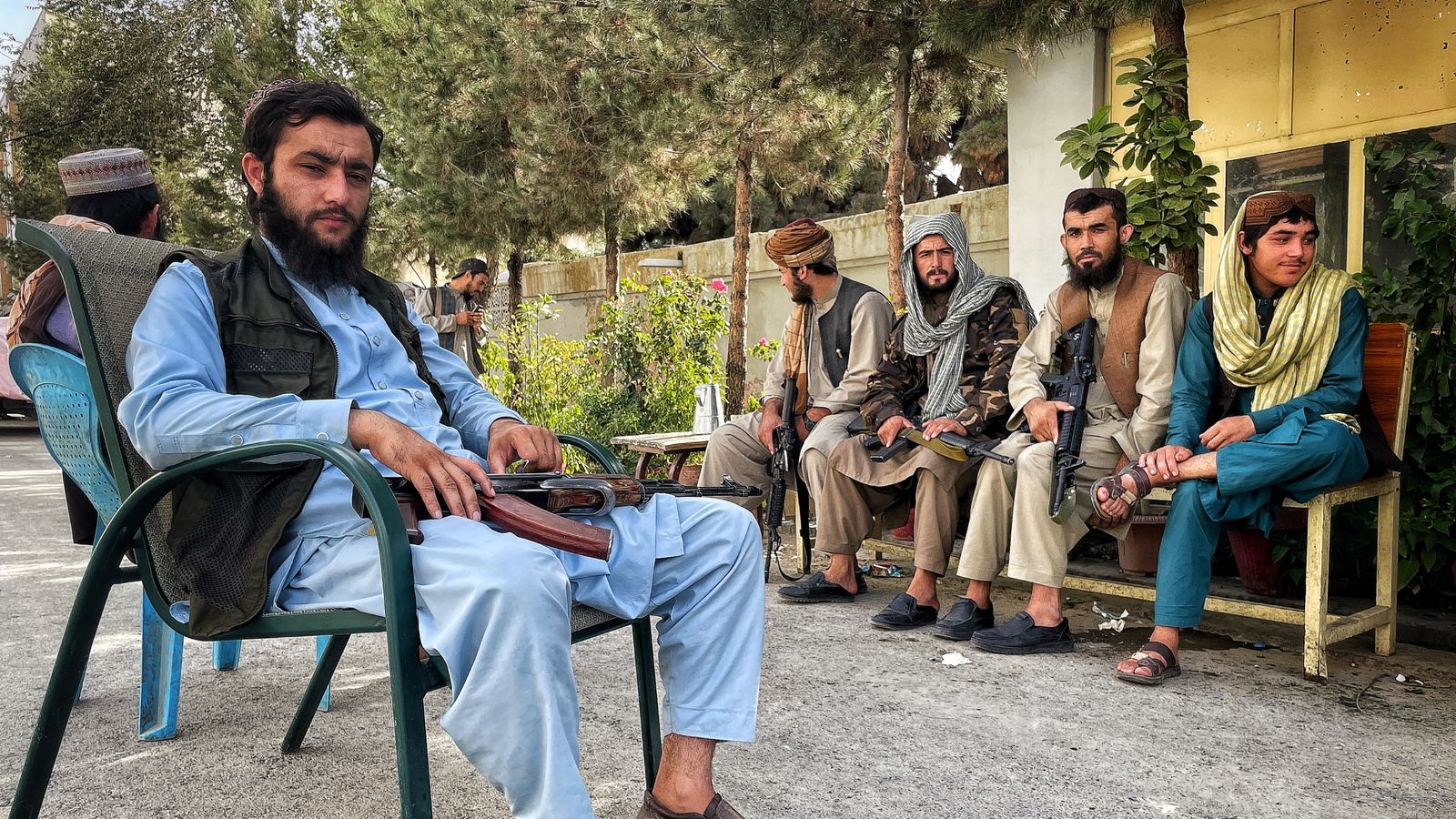 “Praise God, our behaviour is very good now…we are polite, our manners are good and our behaviour is much improved. We’re much better than the last government. Kabul is safe now. Security is good.”

Hafez Sultan Ahmed looks young. He is young and when I remark on it, he says he’s 30.

But he’s been fighting those he calls “infidels” for the past 14 years. The infidels are the Western troops who invaded his country two decades ago – the Americans, the British and all the other foreign troops who joined the Alliance against the Taliban ruling Afghanistan in 2001.

“When I first started fighting, I couldn’t even grow a beard,” he says smiling.

But these men crowded around us with curious questions about our views on them, are also proud of their numerous battles, fighting – and killing – over the past two decades.

This unit were stationed in Faryab in the north and fought first Norwegian soldiers and then Americans.

Hafez tells us he’s killed “too many to count”.

“It was war,” he says, “so I don’t know how many I killed… Once a bomb landed and it didn’t explode so we made five mines out of it and blew five of their armoured vehicles to pieces.”

He seemed to take a peculiar pride out of killing his enemies with the same bomb aimed at him and his fellow fighters.

I ask him how he feels about killing and he smiles. “It was jihad – Holy War – and in Islam we don’t regret this. If I had a hundred lives and even if I was blown to bits, we are still ready to lose our lives for Islam…my greatest joy and my sweetest moments have been doing jihad against the infidels.”

Along with the fighters around him, he really believes they have transformed the security in the country and in the capital city.

“Look the streets are safe now. You couldn’t drive round Kabul before safely because there were too many criminals. Now everyone can.

“We are much better than the previous government. Now Afghanistan is the safest country in the world.”

The boast is unlikely to be believed by many. The Islamic State suicide bombing just at the end of last month which killed nearly a hundred civilians including 13 US service members, seems to have been quickly disregarded.

But it is true, our Sky News team has managed to move around the country and the capital with comparative ease having secured accreditation from the acting government.

There are multiple armed Taliban checkpoints where all our paperwork is checked and double-checked – but these have often been accompanied by a cheery “welcome, welcome”.

But while the Taliban we’ve come across appear to have gone out of their way to facilitate foreign journalists, it’s clearly a very different picture for the Afghans.

They’ve been detained and beaten and in some cases just disappeared. When I bring this up there’re apologies from the Taliban we’re with.

“Some people are rude and don’t know how to behave but our leaders will deal with this and it won’t happen again. We are sorry for that,” we’re told.

We’re invited to join them on patrol but something gets lost in the translation. I am pretty sure they thought just Sky’s cameraman Richie Mockler was going to hop on to the back of their pickup truck.

When I too climb in behind him, there’s a sudden panic amongst the men at this foreign woman in such close proximity. They immediately disembark, leaving just one who’d have had to shoulder barge me out of the way to join the exodus.

Two of them are cajoled by their seniors to get back in the vehicle but one insists on sitting with his back to me the entire journey and the other hides most of the time behind his shawl looking the very picture of shame and embarrassment.

The Taliban leaders know they have to show they’ve moved on and progressed but some are finding it harder than others.

The country relies heavily on foreign aid contributions and support – all of which is now hanging in the balance with this sudden power change.

The sudden collapse of the last government; the announcement of a 33-strong all-male acting Taliban government made up mostly of ethnic Pashtuns plus the crackdown on demonstrations and the media has left international donors worried.

More than worried – fearful and uncertain of what is going to follow. Two of the new cabinet have close links with Al Qaeda and five were Guantanamo detainees.

The Taliban hierarchy understand they need international recognition if they’re going to be able to function at all in the future.

But persuading the world they have changed may be their biggest battle yet.

China continues to snap up Russian coal at steep discounts
Texas Migrant deaths: Truck driver was pretending to be survivor when arrested
Motorists arrested for driving too slowly in protests against high fuel prices
Quick Charge Podcast: July 5, 2022
‘It’s like waiting for Christmas’: Backstage with… Steve Carell as Gru and the Minions return