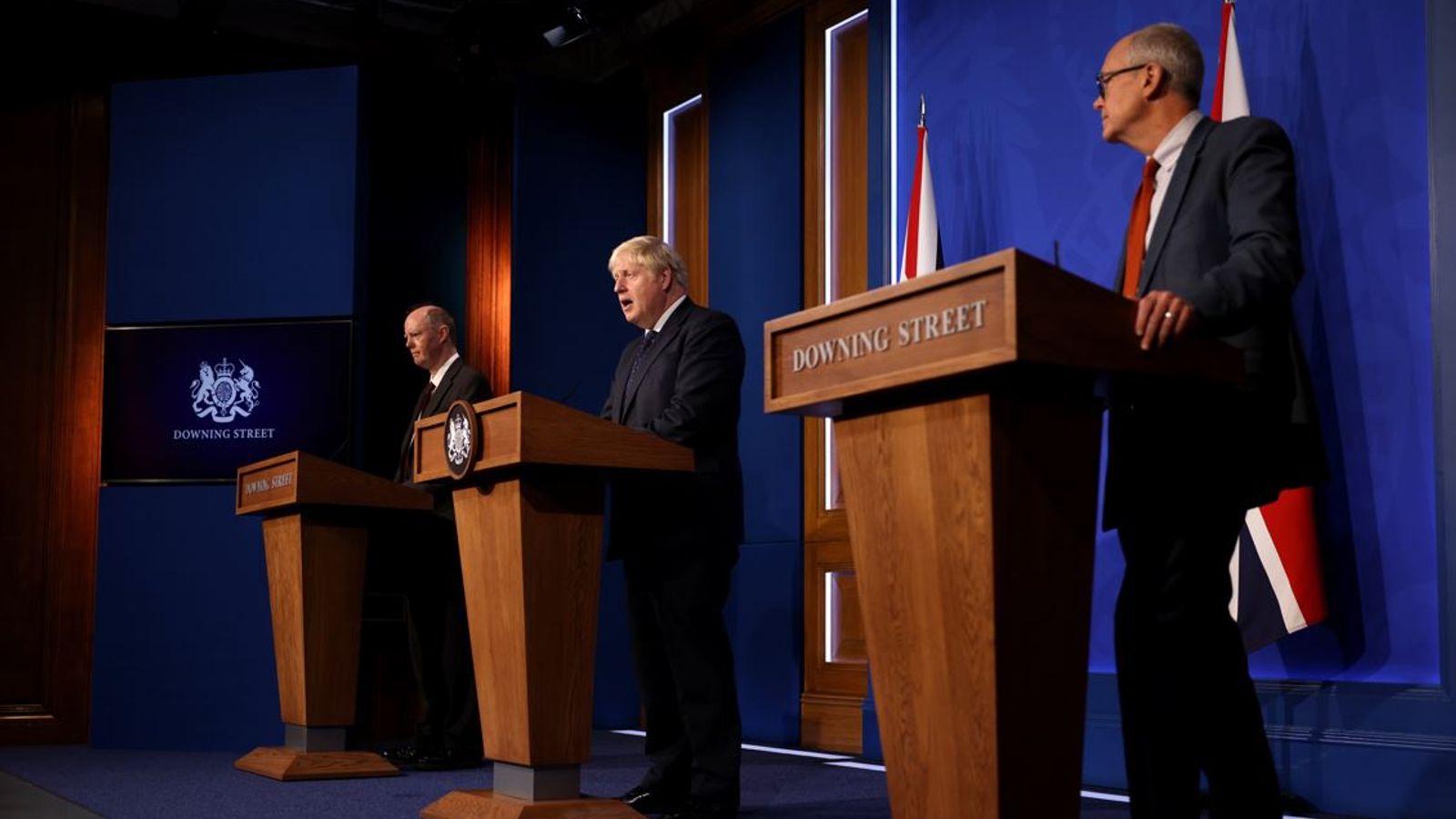 The prime minister has warned coronavirus “is still out there” but vowed his new COVID winter plan “will give us the confidence” to avoid lockdowns.

Speaking at a Downing Street briefing on the day the government set out its winter plan for managing COVID-19 in England, Boris Johnson said that higher case numbers than this time last year meant that in one sense the country’s position was “actually more challenging”.

Live COVID updates from the UK and around the world

But he added that the UK was in an “incomparably” better position to fight COVID-19 because of the success of its vaccination programme.

As a result, the PM said the government was “going to keep going” and would be “sticking with our strategy”.

“Plan A” for the coming months includes a booster jabs campaign which will begin next week, as well as encouraging people to meet outdoors or open windows if inside, wear a face mask in crowded and enclosed places, wash their hands frequently and use the NHS COVID-19 app.

Speaking in the Commons earlier, Health Secretary Sajid Javid said contingency plans would only be activated if there was “unsustainable” pressure on the NHS and initial efforts to control the spread of the virus proved ineffective.

Under the government’s “plan B”, mandatory face masks, vaccine passports and work from home orders could return.

Ministers have also not ruled out another lockdown, although they have stressed this would be deployed as a last resort and would require legislation to be passed.

Asked what would have to happen to force the government to bring in harsher measures, chief medical officer Professor Chris Whitty said the arrival of a new variant that was both transmissible and “escapes the vaccines” would be one scenario where different rules could be introduced.

And he warned that the UK had not yet faced a winter with the “very bad” Delta variant.

Mr Johnson did not get into specifics when asked how bad the situation with COVID would have to get for the government to start bringing back restrictions.

But he said the government’s “plan B” has “a number of different shots in the locker” and “you wouldn’t necessarily play them all at once”.

“We’re now in a situation when because so many of the population have some degree of immunity, smaller changes in the way we’re asking people to behave can have a bigger impact,” the PM said.

But he warned that the virus is “still out there” and “remains a risk”, although he stressed: “We are confident in the vaccines that have made such a difference to all of our lives.”

Asked why the government was not taking mild preventative measures now, Mr Johnson said vaccines were making a “huge difference to mortality”.

“We are continuing to advise everybody to be sensible and responsible… I think that’s the right balance, given where the pandemic is at the moment.”

On vaccine passports, the PM said he could not “rule out completely” the possibility of mandating them at some point in the future.

He said they would have been a “game changer” for businesses last year and described them as an “important part of our repertoire”.

Professor Whitty insisted “lots of people, probably the great majority” are taking measures to prevent the spread of the virus.

He also showed a series of graphs comparing case numbers, hospitalisations and deaths, this September and last September.

Professor Whitty added that people must encourage “everybody we know to get vaccinated” and declared: “We’re about to enter winter. Winter is coming and people really should take this seriously.”