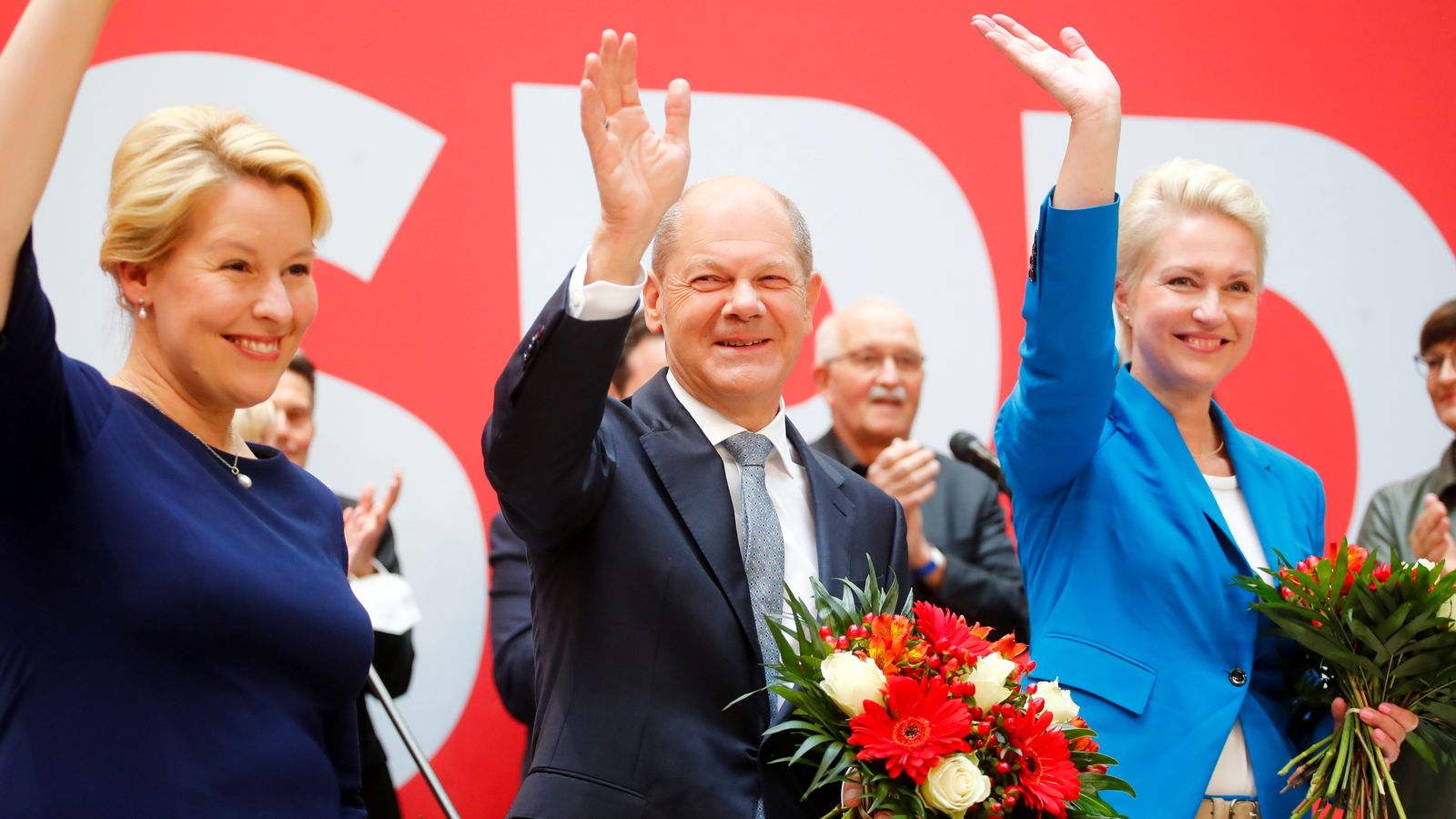 Germany’s Social Democrats (SDP) will seek to start the process of trying to form a three-way alliance and lead the government for the first time in 16 years after Sunday’s tight election results.

Mr Scholz said he aimed to build a coalition with the Greens and the liberal Free Democrats (FDP), saying Germans had voted to send Mrs Merkel‘s conservatives into opposition after 16 years in power.

“They strengthened three parties; the Social Democrats, the Greens, and the Free Democrats; so this is the visible mandate the citizens of this country have given: these three parties should lead the next government.”

But Christian Democrat (CDU) rival Armin Laschet has also announced his intention to form a government, despite leading his party to their worst election result ever.

The candidate for Mrs Merkel’s party is the governor of Germany’s most populous state, North Rhine-Westphalia.

The only other option that would have a parliamentary majority is a repeat of the “grand coalition” of the Union and Social Democrats.

That is the coalition that has run Germany for the past 12 years and has often been marred by in-fighting, but this time it would be under Mr Scholz’s leadership with Mrs Merkel’s bloc as the junior partner.

Mr Scholz has since 2018 been finance minister and the vice chancellor to Mrs Merkel, who will stay in charge on a caretaker basis during coalition negotiations.

The centre-left SDP won 25.7% of the vote after a closely fought election, ahead of the CDU with its 24.1% share, according to preliminary results.

The Greens came in at 14.8% and the FDP were at 11.5%, while far-left party Linke failed to win enough votes to be considered as a coalition partner.

Mrs Merkel has been in office since 2005, but Germany’s allies face a potentially lengthy wait before finding out how its new government will look.

The question of the next chancellor also remains, and the SDP’s general secretary, Lars Klingbeil, told ARD television that the party would fight to ensure Mr Scholz takes the position.

If Mr Scholz succeeds in forming a coalition in the coming months, the former mayor of Hamburg would become the fourth post-war SPD chancellor.

Paul Ziemiak, general secretary of the CDU, said there was still a chance for his party’s alliance with the Greens and FDP, adding that Mr Laschet knew how to keep coalitions together.