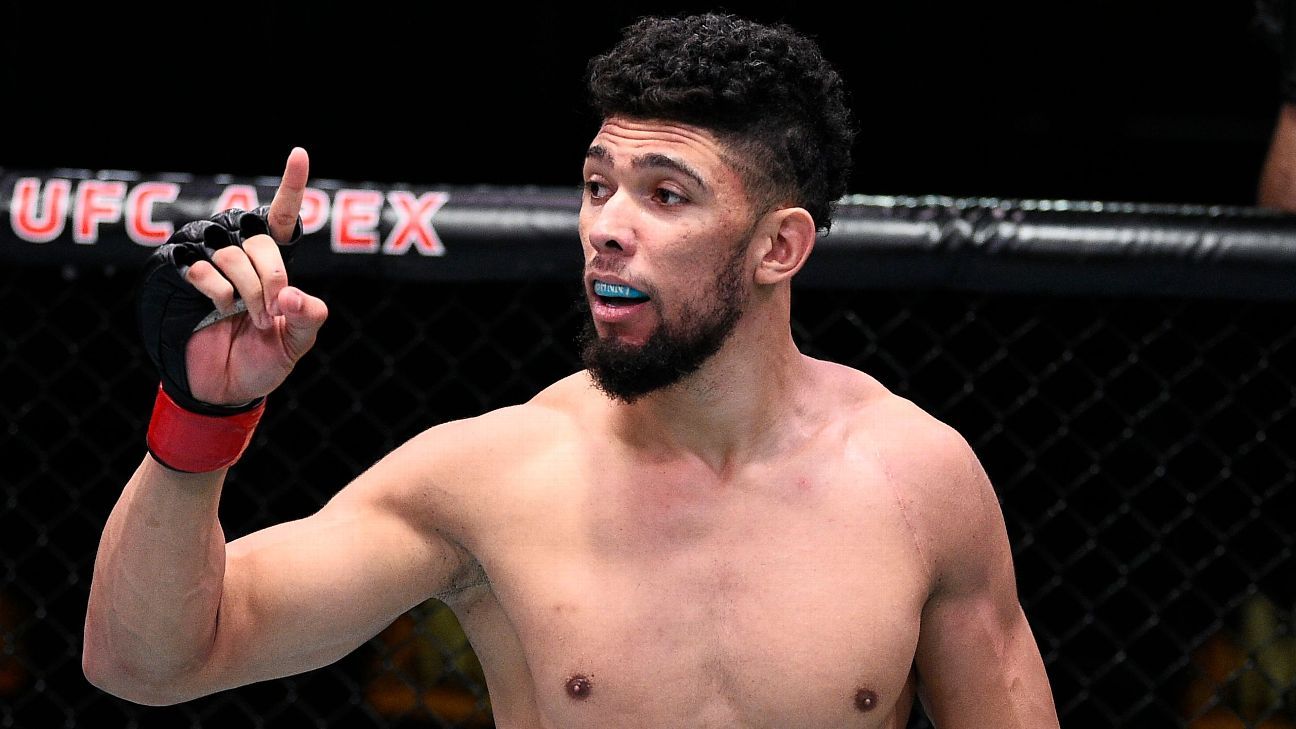 In the UFC’s light heavyweight division, 40 is the new 30.

The current champion, Jan Blachowicz, turns 39 years old in February. No. 1 contender Glover Teixeira, who will challenge Blachowicz for the title at UFC 267 on Oct. 30, is 41.

Blachowicz and Teixeira both have exhibited longevity and perseverance. Blachowicz was nearly cut from the UFC earlier in his career, before winning the title a year ago. Teixeira was written off amid an up-and-down spell following an unsuccessful title challenge in 2014 — and here he is again. That title matchup is a great story for the division, but it also does make one wonder: Is there any new blood coming?

Thiago Santos looks to turn around a three-fight skid that started with a split decision loss in a title challenge against Jon Jones. He takes on Johnny Walker in Saturday’s main event.

The answer to that question is … maybe. And Saturday’s UFC Fight Night main event between Thiago Santos (21-9) and Johnny Walker (18-5) will tell us more. Santos is 37, and has already fought for the title once, a loss to Jon Jones. He’s an exciting fighter with, presumably, plenty of years still in the tank.

But if we’re talking about potential new blood, that would be 29-year-old Walker. He signed with the UFC in 2018 at age 26. His athleticism and danger factor are enticing, but he’s experienced hurdles already. After cruising to a 3-0 record with three first-round stoppages, he suffered tough losses to Corey Anderson and Nikita Krylov.

Walker is part of a new wave of light heavyweights you can see on the horizon, but will they make it to land? Dominick Reyes, 31, looked like someone who could take the division’s helm, but he’s now lost three straight. Magomed Ankalaev, 29, has looked solid and has a big test coming next month against Volkan Oezdemir. Ryan Spann, 30, has promise, but he just lost to veteran Anthony Smith. As did 25-year-old Jimmy Crute. Jamahill Hill, 30, just suffered his first defeat to veteran Paul Craig.

There is certainly talent in this 205-pound division. But will new names emerge, or will the names already at the top remain huddled there? Jiri Prochazka and Aleksandar Rakic are two exciting contenders who haven’t yet fought for the title, but other than that, the top of the division is occupied by a lot of familiar figures.

Will this new wave come into its own over the next year, or will the old guard hold it off? One of those battles will play out on Saturday.

Saturday’s fights are on ESPN+, with the main card starting at 7 p.m. ET and prelims at 4 p.m.

3-0 to 0-3: The number 3 figures prominently in Santos’ UFC career. After moving from middleweight to light heavyweight in 2018, he rolled off three straight wins — all knockouts, including one over now-champion Jan Blachowicz. That put him in a title fight with then-champ Jon Jones. Santos lost that fight and injured both his knees, which put him out of action for a year. Now Santos enters this fight on a three-fight losing streak.

Short work: Walker has the shortest average fight time among active UFC fighters: 3 minutes, 46 seconds. He has four first-round finishes, the second most of any fighter during the time since Walker’s 2018 debut.

And the winner is …

“[Santos is] a good technical striker. He has to keep it technical, not get too excited if he does hurt him or if he gets hurt,” said Tyson Chartier, coach of the New England Cartel. “[Walker] has to go first and go hard and try to turn it into a little messier of a brawl. He won’t beat Santos in a straight up technical Muay Thai battle and he probably has to try to get him early.”

Check out how Chartier and other experts break down the fight and predict a winner.

Since his loss to Jones, we have seen a different Santos. It seems that due to his injuries, Santos, who once was an aggressive striker, has now become a very hesitant and low volume counter striker. We saw this in his last outing against Rakic, which resulted in his third loss in a row.

In order for Santos to get back to his winning ways, he has to use his kicks and let his hands go while moving forward and dictating the pace. However, I just don’t see this happening. I believe the speed and athleticism of Walker might be too much for Santos. For Walker, he has to stay on the outside and stay away from brawling with Santos. Walker also has the option of taking this fight to the ground as Santos will not be a threat off of his back (and would also take away the power of Santos in that position).

Coming off a KO win over Ryan Spann, I believe Walker is getting Santos at the right time in his career. Pick: Walker at +135

How to watch the fights

Watch all of the fights on ESPN+. Download the ESPN App

Don’t have ESPN+? Get it here.

1. Kevin Holland returns to the Octagon for the third time in 2021, looking for his first win of the year after losses to Derek Brunson and Marvin Vettori. Saturday’s middleweight fight with Kyle Daukaus will be Holland’s eighth since the start of 2020, more than any other fighter in the UFC.

Monday through Friday, host Pablo Torre brings you an inside look at the most interesting stories at ESPN, as told by the top reporters and insiders on the planet. Listen

2. Daukaus is one of two fighters on the card whose siblings won at UFC 266 a week ago. Daukaus’ brother, Chris, knocked out ranked heavyweight Shamil Abdurakhimov, and Antonina Shevchenko, sister of flyweight champ Valentina Shevchenko, faces the only undefeated fighter on the card, 7-0 Casey O’Neill.

3. In what has the potential to be the fight of the night, Alex “Cowboy” Oliveira and Niko Price meet at welterweight. Price lands 5.29 significant strikes per minute, fourth highest among active welterweights.

4. Krzysztof Jotko will be fighting for the 15th time in the UFC when he faces Misha Cirkunov, who will be making his middleweight debut after competing at light heavyweight. Jotko has nine UFC wins, one shy of joining Jan Blachowicz (11) and Joanna Jedrejczyk (10) as the only Polish fighters in UFC history with double-digit wins.

5. Aspen Ladd, who faces Macy Chiasson, has not fought since a December 2019 win against Yana Kunitskaya. At the time, ESPN had Ladd ranked as the No. 4 fighter under age 25. Now 26, Ladd is returning from ACL and MCL tears suffered in training in June 2020.