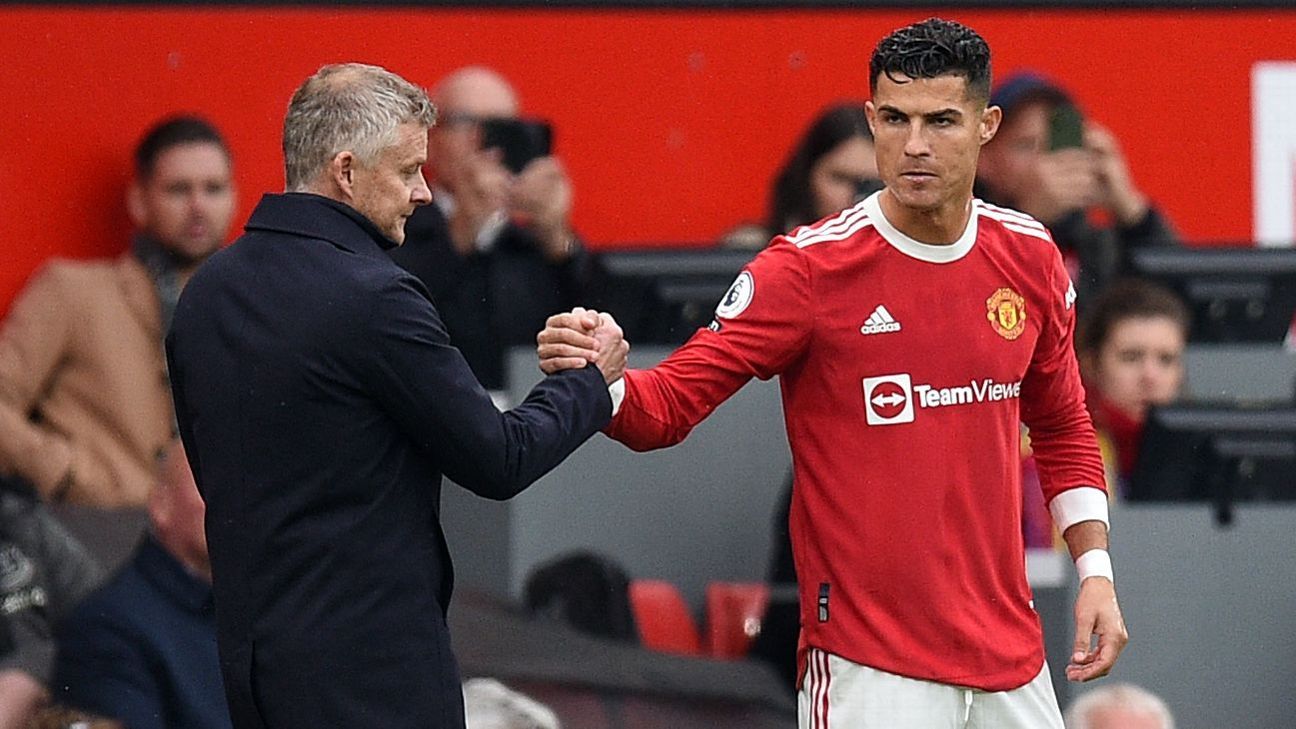 MANCHESTER, England — Nothing is coming easily for Manchester United at the moment, and it’s making life hard for Ole Gunnar Solskjaer.

Three days after the dramatic late Champions League win against Villarreal, there was another frantic finish at Old Trafford. This time, though, there were no Cristiano Ronaldo heroics and Everton held on for a 1-1 draw in the Premier League.

Solskjaer may even count himself lucky to escape with a point after defender Yerry Mina had a late goal ruled out for offside by VAR Stuart Attwell. When Tom Davies watches it back he’ll probably wish he’d gone for goal himself rather than passing to the Colombia international.

Ronaldo, left on the bench along with Paul Pogba and Jadon Sancho, left the pitch at full-time muttering under his breath and shaking his head. It is always a gamble to leave out a player of Ronaldo’s quality and it didn’t pay off. Solskjaer insisted afterwards he had no regrets, saying: “The decision was, for me, the correct one.”

United have now won two of their last six games and end a run of four straight home matches with one win, one draw and two defeats. It’s not about to get any easier for Solskjaer after the international break with the next four league games against Leicester City, Tottenham Hotspur, Liverpool and Manchester City.

Andros Townsend‘s equaliser for Everton to cancel out Anthony Martial‘s goal just before the break also means United are without a Premier League clean sheet at Old Trafford since March. That run of nine games is their worst streak for 50 years, although they have still managed to accumulate four more points than at the same stage last season when they went on to finish second. Football can be a strange game.

“You are sat here a bit disappointed and deflated,” Solskjaer said. “We just have to be focused and make sure we use the international break well. Come back with energy again, clear focus and a good mindset. Today we dominated, we just couldn’t get that second goal we needed.

“We had 75% possession and got hit on one break that cost us. We lacked that cutting edge to get a second goal. We concede one and that is one too many. Today it was a counter-attack that they throw at us. We were well enough organised, we should have dealt with it much better.”

United are in a spell where there seems to be danger around every corner. Everton turned up without Richarlison or Dominic Calvert-Lewin but Old Trafford was still holding its breath every time Rafa Benitez’s team crossed the halfway line. Raphael Varane blocked a shot from Salomon Rondon and Aaron Wan-Bissaka got in the way of another from Abdoulaye Doucoure. David de Gea needed to be in top form against Villarreal on Wednesday and was needed again here, diving low to his right to keep out Demarai Gray from 20 yards.

Martial’s goal, his first in the Premier League since February, came at the right time just before the end of the first half. It was a move to showcase exactly what Solskjaer’s galaxy of attacking stars are capable of. Mason Greenwood fizzed a quick pass forward, Fernandes took it with a first touch like a bag of cement hitting a brick wall and from the layoff, Martial hit the net with a first-time finish. It was as good a goal as United have scored this season — and all while Ronaldo, Pogba and Sancho watched on from the bench.

These players can turn it on when the mood strikes. The danger, though, is never far away — even when they are attacking. Villarreal almost scored straight from a United corner on Wednesday and Everton went one better. After being swept from one end to the other, the ball eventually ended up at the feet of Townsend, who scored and celebrated with a jump and a twist to mimic Ronaldo’s “Siiiuuuu!” celebration. It didn’t help that Fred was bullied off the ball twice by Gray in the build-up and the Brazilian lasted only another five minutes before being sacrificed for Pogba.

“We had enough players behind the ball but we make a couple of bad decisions which cost us,” Solskjaer said. “Those 10 seconds, that counter-attack, we should have dealt with the danger better.”

The calls for a new defensive midfielder will only get louder. However, the problems aren’t limited to keeping goals out but scoring them, too. Everton arrived having shipped 10 in their last four league trips away from Goodison Park but apart from one good save from Edinson Cavani‘s header in the first half, most of Jordan Pickford‘s work was routine.

In four straight home games against West Ham United, Aston Villa, Villarreal and Everton, United have scored just three times. There are issues to solve at both ends of the pitch.