The French interior minister is to visit Calais to inspect efforts in the fight against illegal immigration in the Channel – after Sky News filmed dozens of migrants leaving for the UK as armed police stood by and watched.

Gerald Darmanin is expected to talk to police and address France‘s role in controlling migration as tensions with Britain intensify.

The Home Office has said it will raise Sky News’ footage with French counterparts – after the UK signed a £54m deal with France to increase patrols back in July.

It has described the record rise in migrant crossings to the UK over the Channel this year as “unacceptable”.

Home Secretary Priti Patel told the Tory Party Conference this week that France “is a safe country” and she will “turn back the boats”.

Along with the migrant crisis, UK-France relations have been further strained by the AUKUS submarine dispute and the row over post-Brexit fishing rights.

Speaking to Sky News, Jonathan Portes, UK In a Changing Europe economist, said: “I think it’s there clearly has been a deterioration in the UK France relationship on this score, as well as in many other on many other fronts, whether that ranges from the submarine deal with Australia through to the issues with French fishermen who complained about being shut out of their historical fishing waters near the Channel Islands.

“It’s difficult to know whether this is just one isolated incident or whether this reflects this broader deterioration in UK French relations. Now, to the extent it’s the latter, that clearly is very damaging for the UK and for France.”

A busy weekend of migrant crossings is anticipated in Dover, Kent, due to the good weather conditions.

“The fog is lifting, the sun is coming out and the waters are incredibly calm at the moment, making that perilous journey that slight bit easier to make,” said Sky News reporter Aisha Zahid, reporting from Dover.

“But the calm waters are deceiving, it is still an incredibly treacherous journey down the world’s busiest shipping lane. And if people get into trouble while trying to make the crossing, it can escalate into danger very, very quickly.”

She continued: “This year has been a record year for migrant crossings – and it is going to be a particular concern for the government.

How many migrant crossings have there been, how is Priti Patel trying to change UK policy and what is France doing? Samuel Osborne reports

More than 17,000 migrants have successfully reached the UK since the start of the year. That is double the figure for 2020.

More than 25,000 people have risked death crossing the English Channel on board dinghies, kayaks and other small boats since the beginning of last year, according to PA news agency data.

Home Secretary Priti Patel brought forward a new Nationality and Borders Bill in July, which she claims will help cut the number of crossings.

If passed, the bill will increase prison sentences for people entering the UK illegally.

It will also consider whether someone arrived in the UK legally or illegally when potentially granting them asylum.

The home secretary is understood to have asked Border Force to turn away some migrant vessels from British waters towards France.

France has repeatedly refused to intercept or take back migrant boats.

Alp Mehmet, chairman of Migration Watch UK, said the French police are not making any attempt to stop people from crossing the Channel.

He told Sky News: “They are not doing anything to challenge those coming into France at the point of entry. The EU is doing absolutely nothing to stop them from coming in.

“They are coming from a safe country [France] and that country is doing absolutely nothing to help them stay in that country.”

On Saturday morning, a couple of Border Force vessels made their way out to the Channel. They will focus on getting any migrants they encounter to safety.

French police have come up with a number of reasons as to why they have not intervened with migrant crossings.

Sky News’ Europe correspondent Adam Parsons said officers in Sangatte, Calais, told him they felt outnumbered by the migrants, since one boat was carrying around 80 people, while another said it is “more complicated” when children are involved.

Police also said that once a boat has been launched into the water it is subject to maritime law, so they cannot intervene. 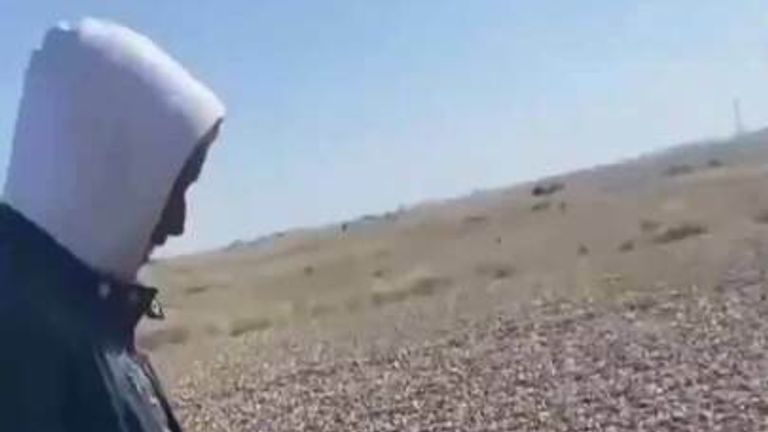 Tensions between the UK and France have continued to rise this week after French fishermen threatened to blockade the port of Calais and cut off Christmas supplies in a post-Brexit fishing row.

They claim they have been “deceived” by the British government over fishing licence applications and have called on the European Commission to take “retaliatory measures”.

And France has again threatened to cut the UK off from energy supplies if the terms of the Brexit deal aren’t stuck to.

The country’s Europe minister, Clement Beaune, said the agreement had to be “implemented fully” and – should it not be – then “we will take European or national measures to exert pressure on the UK”.