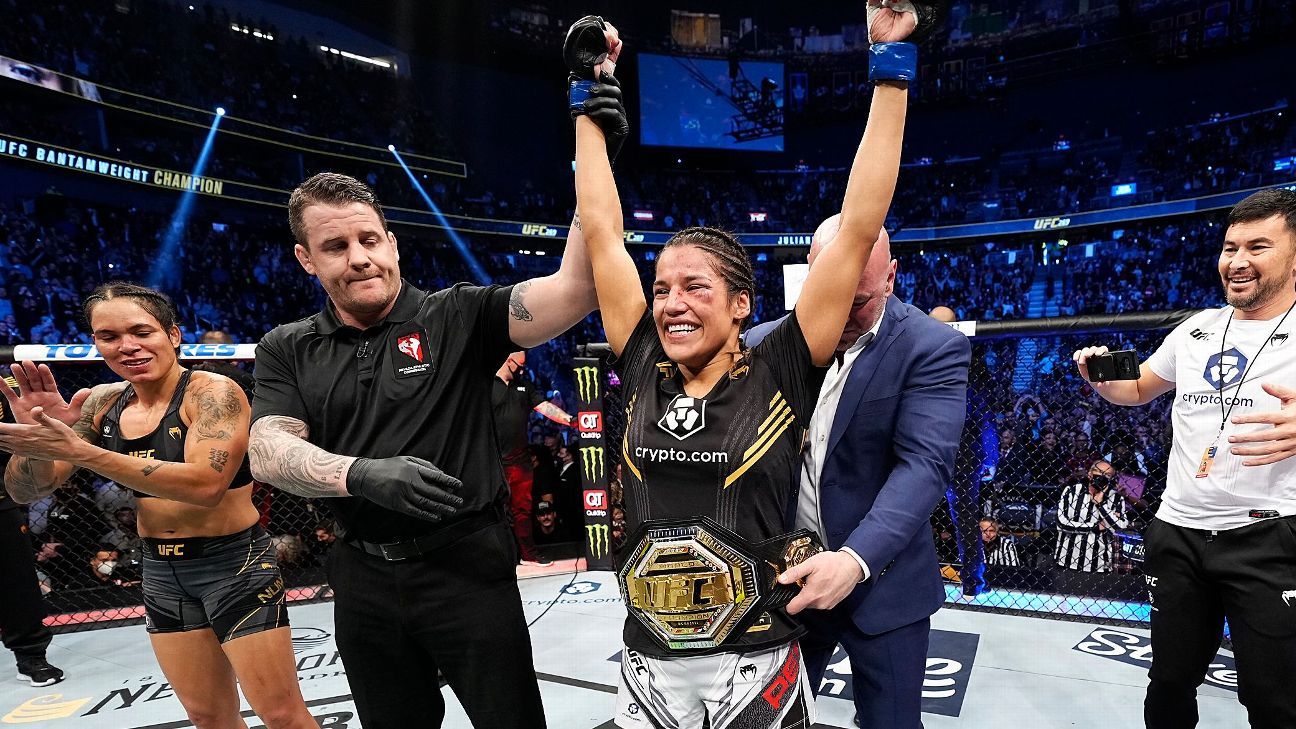 The summer is filling up fast with a combined six title matchups at UFC 275, 276 and 277. Those fights cover half of all UFC weight classes and make for a very compelling summer from an in-the-cage perspective.

So how do each of these six matchups really play out in the cage? Using predictive models agnostic of betting lines, we examined how each champion’s matchup appears from a favorability view. Essentially, is this a good matchup for the champ? The inputs consider each fighter’s performance metrics inside the Octagon, as well as select factors about the fighter outside of the cage. The higher the score, the more favorable the matchup for the incumbent champ.

These scores don’t indicate how to bet the fight, but just the relative favorability running from riskiest to best matchup.

The ageless wonder Teixeira will be defending his belt against the very dangerous and unpredictable Prochazka at UFC 275. Out of all the title fights this summer, this fight is the most unfavorable for the champion. Don’t get me wrong, Teixeira has shown time and time again that he has incredible heart and doesn’t back down from a challenge, but if he can’t get the fight to the floor, he will be in a world of trouble. Teixeira is a good striker, but Prochazka is on a different level. In many of his fights, we’ve seen Teixeira get dropped and then have to come back to win. I am not so confident that if he gets dropped by Prochazka that he will be able to recover.

Prochazka’s striking is unique and highly unpredictable, which has given his past opponents problems until he ultimately finished them via a vicious KO. Prochazka also keeps getting better. Would it be incredible to see Glover get a submission win and defend his belt successfully? Absolutely! But I think Prochazka’s takedown defense — which he says he’s been working on — along with his distance striking, will be more than enough to keep this on the feet.

In one of the biggest upsets of all time, Peña did what many thought she couldn’t by defeating Nunes by submission at UFC 269. Now, can lightning strike twice?

Looking back at their first fight, Nunes dominated Pena with her striking in Round 1. In Round 2, her striking was still strong until she started to gas out, allowing Peña to weather the storm and capitalize with her own offense.

For Nunes to take this rematch, she would only do it if she was hungry and wanted to prove something. As long as her cardio holds up and she paces herself better, I believe she has a great chance of winning her title back. We know that Pena will come out swinging, and we know her cardio won’t be a problem, but can she weather the storm again? Or will she try to take Nunes down early and tire her out? That is entirely possible. However, I think we get a well-prepared Nunes, who won’t get gassed, and if that’s the case, we have a double champ once again.

Shevchenko defends her belt against Santos in just a couple of weeks. As well as Santos has fought on her four fight win streak, I don’t see her being the person to dethrone Shevchenko. Does Santos carry good striking power? Yes. Does she have a submission game? Yes. But are either of those better than what Shevchenko brings to the table? No.

Shevchenko has repeatedly shown that she is light years ahead of her competition, and it doesn’t matter where the fight goes. I expect Shevchenko to do what she typically does and pick Santos apart with her striking. If Santos can get this fight to the floor, and that’s a big IF, she will have to be careful of Shevchenko’s submission game — 32% of her finishes have come by submission.

The fight that will pose the biggest challenge to Shevchenko would be a bout against the winner of Pena and Nunes. Until then, no one in this division poses much of a threat.

Because Deiveson Figueiredo is unable to defend his belt, Moreno and Kara-France will battle it out for the interim title. Out of all the title matchups on the horizon, this is one of two that I think will be a true battle for all five rounds.

Both Moreno and Kara-France are excellent strikers with significant volume and endless gas tanks. They have no problem going the full distance at a blistering pace. The only difference between the two that gives a slight edge to Moreno is his wrestling and submission game, something Kara-France hasn’t shown since 2013. In his last fight, Kara-France was able to defend against the wrestling of Askar Askarov. However, Askarov doesn’t present the same threat on the feet as Moreno, leading to more openings for getting the fight to the ground.

For Kara-France to get the win, he will need to keep the fight standing. He’ll also need to be able to take whatever Moreno throws at him and land consistently, which is no easy task. What Kara-France has in his favor is his knockout power, as we saw in his fight against Garbrandt and Rogerio Bontorin. However, Moreno has never been finished in his MMA career.

Volkanovski will be looking to continue his 11-0 UFC run as he enters the trilogy fight against Holloway. Since their last fight –which was extremely close — the champ has dominated in wins over Brian Ortega and Chan Sung Jung. Of all the matchups in the division, Holloway is the toughest one for Volkanovski and credit to the champ for welcoming this challenge. Holloway is a tough challenge for anyone, and he has only been finished once in his entire career.

Since his second loss to Volkanovski, Holloway bounced back and looked incredible against Calvin Kattar and Yair Rodriguez. Holloway showed tremendous levels of striking and volume in both fights that would give any opponent problems. Do I think this has the best chance for an upset? No. But can I see it happening? Yes. This will be an extremely competitive fight, especially if we get the same Holloway that fought Kattar.

Adesanya will be looking to continue his dominant reign as middleweight champ as he welcomes a new challenger in Cannonier at UFC 276. Out of his past five opponents since winning the belt, I believe that Cannonier will be the most favorable stylistic matchup Adesanya has had in quite some time.

Although Cannonier possesses great knockout power, he doesn’t pose much of a threat anywhere else. Cannonier isn’t much of a wrestler and hasn’t scored a submission win since 2013. If Cannonier cannot get the fight to the ground, this fight becomes a pure kickboxing match, one that favors the champ. As we saw in Adesanya’s last fight against Robert Whittaker, his takedown defense has improved tremendously, which gives him the ability to keep the fight standing. Adesanya also does a great job of not putting himself in danger and utilizes his distance to avoid taking any power shots from his opponents. He has fought other opponents who rely on their strength, like Paulo Costa, and Adesanya was able to use his speed to avoid Costa’s strikes and ultimately get the finish himself.

Unless Cannonier lands a spectacular punch without taking one himself, I don’t see any other way he can get the upset.

World UFO Day 2022: What Are UFOs and How Did the Theories Around Them Originate
The new powerful US weapon being used by Ukraine against Russian targets
Cheer star jailed over multiple child sex charges
Motorists arrested for driving too slowly in protests against high fuel prices
Chicago shooting suspect confessed to police ahead of court appearance, state attorney says