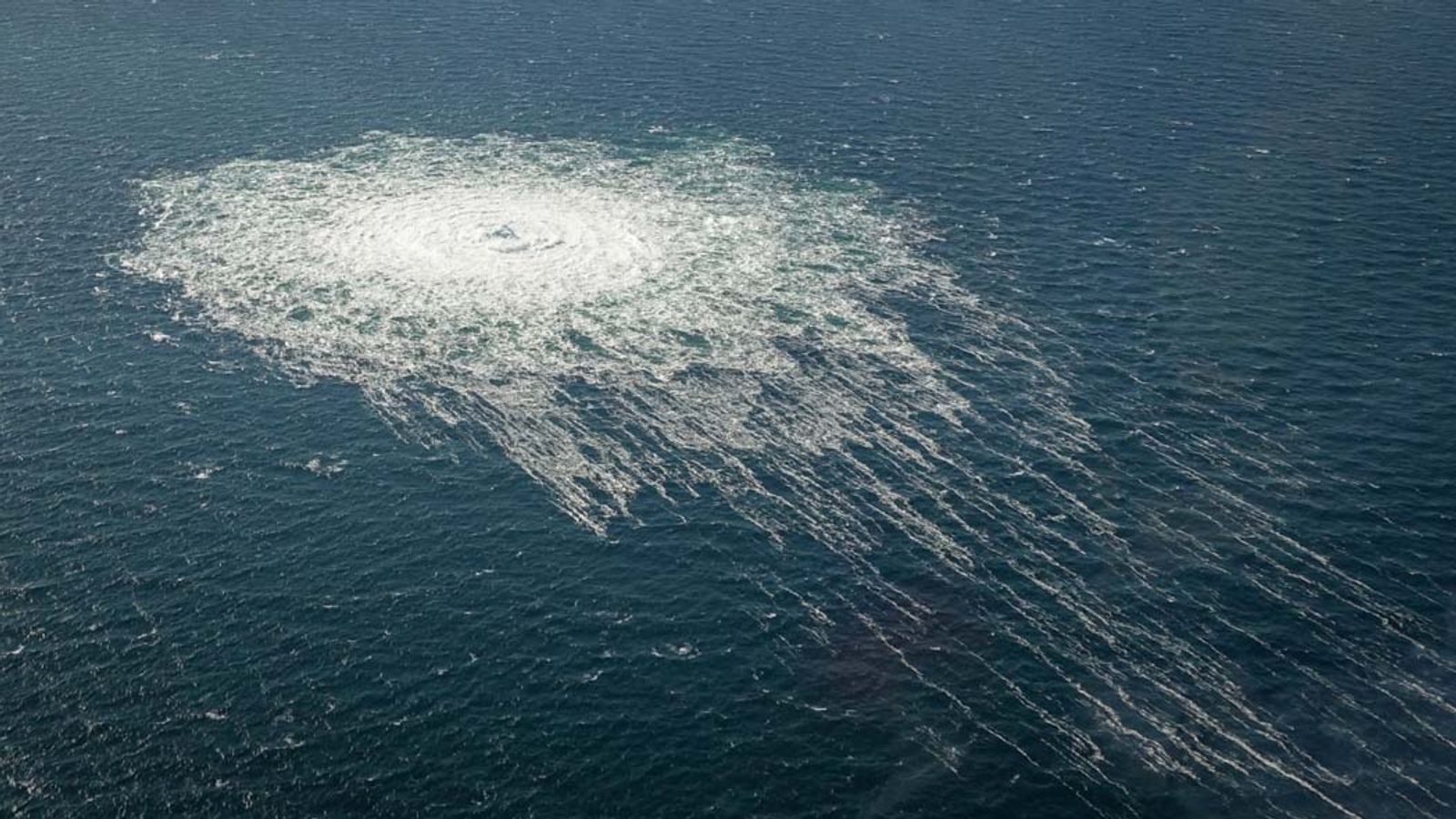 The Nord Stream pipeline network, part of which supplies Germany with gas from Russia, has been damaged in three places, its operator has said.

The damage to the gas pipeline system on the bed of the Baltic Sea – all caused in one day – was “unprecedented”, Nord Stream AG added.

The Kremlin said on Tuesday it could not rule out sabotage as a reason behind the damage, while other authorities are investigating.

The Danish energy authority also said it could be a deliberate act as any event like this was “extremely rare” and a European security source told Reuters: “There are some indications that it is deliberate damage. You have to ask: Who would profit?”

But a reading from a nearby seismograph, which records vibrations on the surface of the planet, was later found to to show spikes at similar times to when the losses in pressure in the pipes were first recorded, according to a German geology research centre.

Earlier, Sweden’s Maritime Authority issued a warning about two leaks in the Nord Stream 1 pipeline, which until the Ukraine war provided about 60% of Germany’s gas needs.

On Monday, Denmark issued a warning about a leak in the yet-to-be-opened Nord Stream 2 pipeline, which had been built to boost the amount of Russian gas supplied to Germany.

Denmark’s energy authority added that it expected the leak will continue for several days and perhaps even a week.

Nord Stream AG said it was impossible to estimate when the gas network system would be working again.

“The destruction that occurred on the same day simultaneously on three strings of the offshore gas pipelines of the Nord Stream system is unprecedented,” Nord Stream said in comments to reporters, without saying what the company thought was responsible for the damage.

“It is not yet possible to estimate the timing of the restoration of the gas transport infrastructure.”

Nord Stream 1’s twin undersea pipelines opened in 2011, with the ability to supply up to 27.5 billion cubic metres of gas a year each.

But, since fallout from Russia’s invasion of Ukraine, and the EU’s determination to cut its reliance on Russian gas, flows through the Nord Stream 1 have reduced to zero.

Russia has been accused of using variation in gas flows as a weapon, something Russia blames on Western sanctions.

The German government has withheld the licence of Nord Stream 2 because of Russia’s actions.

Despite not carrying gas to Germany and beyond, both pipelines have apparently remained full of gas, which is now leaking into the sea.

Pressure in Nord Stream 2, which had been filled with 177 million cubic meters of gas, dropped from 105 bars to 7 bars overnight, indicating most of it had leaked out already.

It was not immediately clear what consequences would follow from that, especially as methane in the atmosphere is a driver of climate change.

German environmental group Deutsche Umwelthilfe said any effects from an explosion would be local and that, depending on the depth where the leak occurs, some of the gas would dissolve in the sea.

The cut in supplies of Russian gas to Europe is one of the main drivers of higher gas prices that have caused inflation to surge in the UK and elsewhere.

On Tuesday, a ceremony was due to be held to inaugurate a new pipeline, Baltic Pipe, to carry Norwegian gas through Denmark to Poland, which it is hoped will ease some of the pressure on European gas supplies.

I lived through China’s COVID lockdowns for the best part of three years – it’s a miserable existence
50 migrants diagnosed with diphtheria in UK this year, with most in last two months
Shapps launches review into ‘exploitative’ late payments for small companies from larger firms
What’s being done about ‘murder-for-hire’ sites on the dark web, and how dangerous are they?
Ian Blackford stepping down as SNP’s Westminster leader