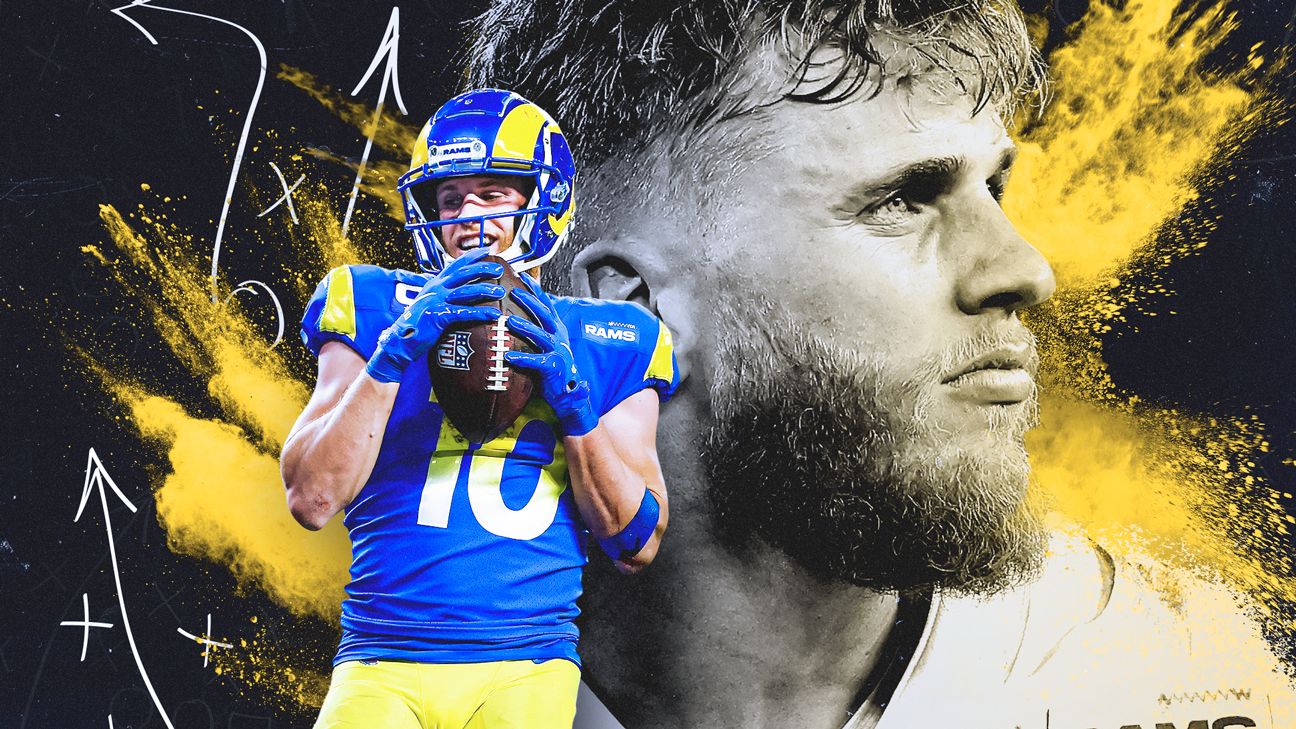 THOUSAND OAKS, Calif. — If you’re looking for wide receiver Cooper Kupp after practice, he can often be found in the ear of a defensive back.

On the field after practice, right after a play or in the locker room, he’s asking the Los Angeles Rams defensive backs what they’re seeing from him, and asking for tips and tells they see or feel against him during practice. And it’s not only All-Pro cornerback Jalen Ramsey he’s asking, but rookies Cobie Durant and Russ Yeast.

Durant, a fourth-round pick out of South Carolina State, said he couldn’t believe a “Triple Crown guy’s asking me questions and getting pointers from me.”

“He’s just trying to play the game before he even gets to the game,” Yeast said. “And that’s what kind of makes him great.”

And that’s how Kupp continues to improve, even coming off a season in which he led the NFL in catches, yards and touchdown receptions and was named Super Bowl LVI MVP. Somehow, Kupp has become an even bigger part of the Rams’ offense, accounting for 33% of his team’s targets this season, which is the highest rate in the NFL.

The Tampa Bay Buccaneers experienced firsthand just how difficult it was to try to stop Kupp twice last season, including in the divisional round, where he had nine catches for 183 yards and a touchdown to help send the Rams to the NFC Championship Game.

“He does everything well,” said Buccaneers head coach Todd Bowles, who was Tampa Bay’s defensive coordinator last season. “He blocks, he runs routes, he’s outside, he’s inside, he’s in the backfield, he’s at the line of scrimmage, he’s in motion, he throws passes, he catches the ball. … He has good size that goes unnoticed when he’s blocking, but he has good size to get on you.

“He’s one of them rare players that comes around every couple of years.”

ON SATURDAY MORNINGS, Kupp’s at the front of the wide receivers meeting room, clicker in hand. He runs those Saturday meetings, wide receivers coach Eric Yarber said, “because he is just a coach on the field.” Perhaps the biggest compliment comes from Rams wide receiver Ben Skowronek, who says having Kupp run the meetings is “pretty much the same as having Coach Yarbs run it.”

“When we come to the sideline after plays, Cooper can tell you exactly what happened on every play, almost like Sean,” Yarber said. “And it just helps me out that much. It makes it that much easier to coach.”

How detailed is Kupp’s knowledge of the Rams’ offense?

Get your lineups set for your Week 9 fantasy football matchups with analysis for each of the games left to be played, last-minute pickup options, and our take on the biggest stories of the weekend.

The Playbook: Week 9
Mike Clay breaks down each game from all angles, with projections and advice for key players.

Fantasy Hot Seat
Eric Karabell discusses players who are facing the most pressure to perform, including some tough start/sit decisions.

Last-minute pickups
Matt Bowen offers names to consider if you need a bye-week fill-in or if you’re streaming at a position.

That knowledge “makes him play much, much faster,” Yarber said, adding that the day before in practice, when offensive linemen made the wrong call, Kupp noticed right away.

And though he put up historical numbers last season, Kupp is the type of player who would come to the coaching staff early in the week with run ideas.

“Not only pass ideas, but run ideas where he was involved blocking,” Minnesota Vikings offensive coordinator Wes Phillips, who was the Rams’ pass-game coordinator and tight ends coach in 2021, said. “[He] listened when the line coach was giving his run presentation as far as techniques, blocking. He asked questions. All the things that he did in the pass game were really special, but he was really special mentally in all other aspects.

“For a guy leading the league in receiving, and he’s coming in, saying, ‘I think this run would be good. I can help seal the edge right here,’ is rare.”

The knowledge of the offense comes from preparation. Cincinnati Bengals cornerback Chidobe Awuzie said he and Kupp trained together when they first got to the league. “Seeing the way he approaches the game,” Awuzie said, “I haven’t really seen a receiver approach it that way, that meticulously, with that much desire to learn, to study, to learn from people who played the position at a high level.

“He’s not going to go to sleep before he gets something done. He’s at the facility all the time, trying to get better film-wise. And then when he goes home, it doesn’t stop there. It continues. That may continue for eight hours, nine hours, I don’t know. I just know he’s a real football junkie — like a true football junkie.”

“Having that film study and then being able to, like, execute it and recognize it on the snap and the run — that’s his ability that he has [over] most receivers,” Dean said.

Kupp says that work comes from his desire to always be coached.

“If I stepped on the field like, ‘I’m not going to learn anything new today,'” he said. “That wouldn’t be me. That’s a very boring thing for me. I want to be able to continue to learn.”

That mindset helped Kupp, in his sixth NFL season, develop his route running. Kupp said he leaned on veterans on the roster at the time, including Brandin Cooks, Sammy Watkins and Robert Woods, who said Kupp was “like a sponge, soaking up everything.”

It’s so difficult to defend Kupp, Yarber said, because he makes every route look the same.

“That makes you play honest,” Yarber said. “You can’t jump things. If you jump things, he’s making it look the same. And if you thought he was going in, he gives you the look … that he’s going in. But he’s breaking out.”

Bengals cornerback Mike Hilton said Kupp is “real decisive in his [release]” off the line of scrimmage — and knows how to attack a defender’s leverage.

“Your [release] as a receiver is really how you set up your defender,” Hilton said. “If you straight-line [release] them, obviously, it’s going to be more vertical routes. … But say you’re running a slant. You obviously want to [release] outside because you’re trying to beat the defender inside. So you [release] outside and go back underneath. That’s what Kupp does, man.”

Skowronek said Kupp “does a really good job of understanding pre-snap, post-snap looks, leverages based off whatever coverage it is and being able to attack leverages.”

“And I think that’s what makes him so special is being able to do that and just knowing coverages so well and just having a plan each time he gets up to the line of scrimmage,” Skowronek said.

Bengals coach Zac Taylor, who was the Rams assistant wide receivers coach during Kupp’s rookie season said Kupp “is like a quarterback playing receiver” because he wants to know the “why” of every play.

“If he needs to go an extra yard to break it off and get open, [he can],” Durant said. “He can get open whenever he wants to, I feel like. He’s not Triple Crown for nothing.”

Coen said he thinks it’s Kupp’s overall knowledge of the game that has helped him become a better player in all aspects, whether that’s in the pass or the run game.

“Every receiver wants the ball as much as humanly possible, but where do you fit in the concept?” Coen said. “How can you help your teammates get open in a lot of instances? The nuances of his game are obviously [based off] experience, but also the work that you’re alluding to.”

KUPP TOOK A big jump forward last season, ending the 2020 season as a solid receiver for the Rams and ending the 2021 season as Super Bowl LVI MVP and putting up historic numbers in the process. One difference for Kupp between those seasons was the addition of quarterback Matthew Stafford. McVay said the pair “immediately had a special rapport,” something he could see even as early as their first training camp together. The pair are so close that Kupp wore Stafford’s No. 9 jersey when he signed his contract extension in June.

“You could kind of see a big season for Cooper coming, just based on the different things that they were able to get done,” McVay said.

Every morning, Coen said at 6 o’clock or even earlier, Stafford and Kupp are in the film room together.

Ramsey, who goes against Kupp during practice, said the chemistry with Stafford “is second to none.”

“When a quarterback and receiver have chemistry, it’s really tough to defend them anyway because they know how they want the routes run, they know where the ball placement will be,” Ramsey said.

There’s no doubt Stafford has leaned on Kupp this season, especially when the offense has struggled to move the ball consistently. Kupp currently accounts for 71% of his team’s receiving touchdowns, which is tied for most in the NFL, and 39% of his team’s receiving yards, which is third in the league behind Vikings receiver Justin Jefferson and Miami Dolphins receiver Tyreek Hill.

“They’ve got a love connection going on there,” San Francisco 49ers safety Jimmie Ward said. “He stays on him the whole play.”

Stafford said he knows he can depend on Kupp on the field because “he does a great job of being where he is supposed to be at the right time.”

“He has a great concept and understanding of what we’re trying to get done, both in the run game and the pass game,” Stafford said. “And then he’s a physically talented guy. When he gets those one-on-one opportunities, he can win and give me a surface to throw the ball. And then, an elite trait is catching it and then obviously the run after the catch is pretty special.”

And that feeling from his quarterback is widely reflected by his opponents, too.

“He’s a great player, one of the best guys in the league,” Buccaneers safety Mike Edwards said. “Just watching him on film — he stands out. The volume of balls that he gets, they feed him a lot. He gets open … shhh [shakes head] … I don’t know, no matter what. He runs some crazy routes that you got to try to stop to guard. He’s just a great player. He finds open zones to get in. If you’re man-to-man, he shakes his guy to try to get open.

“… My rookie year, we played them, I wasn’t really that hip to him. And I was like, ‘Man, this guy’s pretty good.’ And he kept getting better. I feel like he getting better every year. He’s one of those guys that keeps progressing every year.”

Ruling party will be watching as unprecedented protests break out in China, but so too will the world
NBA Power Rankings: Celtics and Suns surging into December
Man arrested over fatal shooting of Migos rapper Takeoff
Shapps launches review into ‘exploitative’ late payments for small companies from larger firms
Why this could be the committee’s easiest — or hardest — CFP selection